Andrea Corr MBE had 258 life-size painted, baby elephants to choose from in London’s biggest ever open air art exhibition this summer, but the pop star and charity fundraiser only had eyes for one. ‘Lover’ painted by Newcastle artist Jeff Rowland was the star of the Elephant Parade London 2010 as far as Ms Corr was concerned, as she bid a massive £26,000 at a star studded auction at Sotheby’s to secure the work of art. The remaining herd of elephants was sold via public auction online this month, raising a total of over £4million for the Elephant Family charity, which is dedicated to protecting and conserving the endangered elephants of Asia. 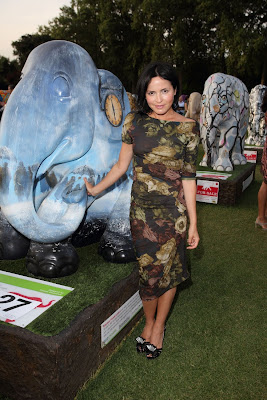 Newcastle’s ‘Rain Man’ artist, Jeff Rowland, who is well known for his cinematic art, painted an epic scene across the seated, life-size baby elephant. His painting depicted lovers meeting in a romantic 1940s railway station, with Rowland’s signature romantic rain falling over the elephant’s back.

Appropriately, Rowland’s elephant was displayed in Berkeley Square, London, during the parade, the location for the romantic song ‘A nightingale sang in Berkeley Square’; and it was the softer side of Rowland’s image that connected with big hearted Andrea Corr.

Jeff Rowland’s work, on more conventional canvas and paper, can be seen year round in Castle Galleries Newcastle thanks to a publishing deal with the UK’s leading fine art publishers – Washington Green Fine Art Publishing. In all, six of Washington Green artists painted life-size baby elephants to take part in the parade which helped contribute just under £100,000 to the £4 million total. 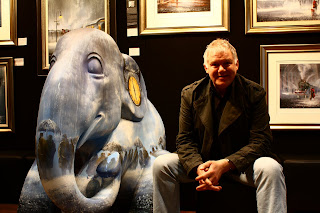 Congratulations to Jeff Rowland, the rather gorgeous Andrea Corr and The Elephant Parade London 2010 from all of us here at Castle Galleries Newcastle. Anthony, Rachael, Sarah and Bethan.

Update Note: September 2018 Jeff was working on another Elephant “Elmer” . At the time of writing it is unknown if Jeff finished his model – he was unwell at the time and passed away two months later.

About 60 large Elmers – each one decorated by an artist or celebrity – will be positioned around Tyne and Wear, mostly near Metro stations, from August 19 to October 27, 2019. It will be interesting to see if Jeff’s work is displayed.

This site uses Akismet to reduce spam. Learn how your comment data is processed.